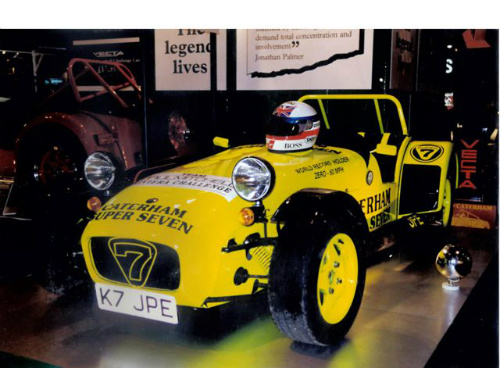 When the Cosworth BDR engine was no longer available, its replacement took the form of the Vauxhall 2 litre, 16 valve, twin cam unit, which produced 165 bhp.

As soon as supplies of the Vauxhall engine ceased, Caterham reverted back to tuned versions of the Rover K Series units.

When the 230 bhp unit was added to a Superlight chassis which had been stripped down, it was capable of a 0-60 mph time of 3.4 secs, outshining the JPE Seven, since its lower output was offset by the fact that both the engine and chassis were lighter.

In 2000, Caterham created the option of the Series 5 (or SV), which had a wider chassis.

This model produced performance on a par with the R500, and gained a Class win at the Nurburgring 24 hour race in 2000.

Since 2000, a Canadian company has marketed Caterham Sevens fitted with a 1300 cc Suzuki motorcycle engine, and producing a 0-60 mph time of under 3 secs. 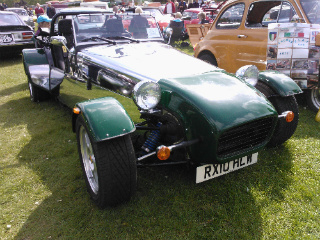 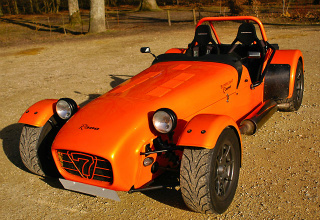 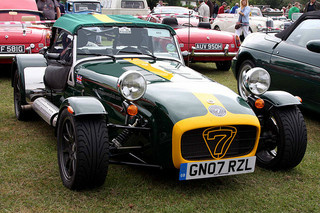 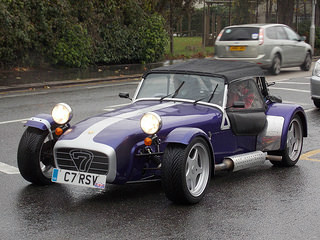 In 2002, Caterham entered a tuned, K Series R400 at Nurburgring, where it swept competition aside to win its Class resoundingly.

In 2004, Caterham introduced the R500 Evolution, with a 2 litre, K Series engine developing 250 bhp, and which produced a new record for a standstill to 100 mph and back to standstill time of 10.7 secs.

That same year saw the development of the CSR chassis, which featured a firmer spaceframe.

By this time, Cosworth were supplying Caterham with tuned Ford Duratec engines, producing 200 bhp and 260 bhp.

After the demise of Rover, Caterham replaced the K Series engines with Ford units, such as the Sigma engine for the Roadsports model, and the 2 litre and 2.3 litre Duratec units for the Superlight and CSR models.

The entry level Caterham sports car was now designated the Roadsport, and was essentially the former Seven Classic model with either a Series 3 or SV chassis, and standard extras including a heater, hood, carpets, and a spare wheel.

It offered a series of Ford Sigma engines, developing from 125 bhp to 175 bhp, with the suspension as per the Classic.

The factory built CSR range was powered by either a 200 bhp, 2 litre or 260 bhp, 2.3 litre Ford Cosworth Duratec engine.