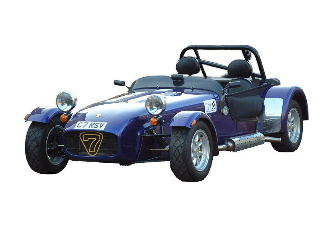 The Early Caterham 7 sports car. On 1st January 1973, the UK joined the EEC, and the result of this for Lotus was that, with the introduction of VAT, cars assembled from a kit were no longer able to claim exemption from taxation.

Accordingly, in August 1973, Lotus sold the rights to the Lotus Seven to Caterham Cars, its sole remaining agent in the UK, and Steel Brothers Limited in New Zealand.

In the first instance, Caterham were obliged to continue production of the current Series 4 model.

This version did away with the original styling and the aluminium body panels in favour of a fibreglass body with a square edge style, which did not bode well with traditionalists.

However, once stock of the Lotus components for the Series 4 ran out, some of the existing suppliers were unwilling to supply Caterham since the projected volume was regarded as too low.

On the other hand, there still existed a healthy market for the original Lotus Series 3.

When they approached the original suppliers of Series 3 components, the corresponding jigs and tools were still available, so additional components could be provided economically.

The solution was therefore clear. The Series 4 would be discontinued, and the Series 3 would be reintroduced.

Even though, at that time, there was a looming oil crisis and a three day week, Caterham was flexible enough to satisfy the small but consistent demand for the Series 3.

In 1976, the basic Seven was so successful on the track that the RAC banned it from all UK race meetings simply because it was winning too many races.

Apart from the badge, there was little difference between the original Lotus Seven Series 3 and the re-branded Caterham Seven Series 3.

Furthermore, there was even a Caterham equivalent to the Lotus Twin Cam model.

The introduction of the front wheel drive Ford Escort Mark 3 meant that the supply of suitable Ford back axles for the Series 3 would soon cease.

This was overcome by using the back axle from a Morris Marina saloon.

The most popular power plant at that time was still the Ford 1600 cc Crossflow unit.

In 1982, the cockpit was increased in length by 2.5 inches to create what was designated the Long Cockpit model, targeted at customers taller than the original customer profile of 5' 6".

This was the fastest Caterham Seven sports car built so far. 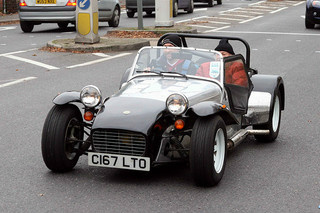 The 1980's saw the growth of competitive kit cars rivalling the Seven, and at lower prices.

Consequently, Caterham introduced a basic "Classic" range of the Seven in a format similar to the specification of the original Lotus Seven.

In this way, it was felt that traditional Seven customers would remain loyal to the Lotus successor.

Between the 1980's and 1996, there were many exciting developments in the Caterham Seven.