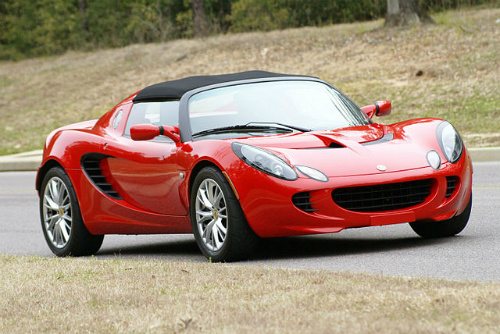 The Lotus Elise Series 1 sports car could not be produced, in its present format, beyond 2000 due to new European Directives concerning the ability of cars to withstand impact.

Accordingly, in order to fund the necessary development work, Lotus had to establish a new business partnership.

The outcome was that General Motors agreed to support Lotus, with the proviso that Lotus was to build forthcoming European Opel And Vauxhall sports cars, using GM power plants and badges.

These GM-branded cars were built on the same production lines as the existing Lotus models until they were discontinued in late 2005.

In October 2000, the Lotus Elise Series 2 sports car was launched, and consisted of a redesigned Series 1 unit incorporating a modified chassis in order to accommodate the new regulations.

It had a restyled interior and hood, lowered sills for easier access, uprated suspension, and an improved braking system.

A less highly tuned version was also available, in the form of the Toyota 1ZZ.

The smooth lines of the Elise Series 1 gave way to a more angular form of body styling in the Series 2 variant, which was available as Sports Tourer or Race Tech versions.

However, the standard Rover K-Series engine was retained from the Series 1, whilst a new Lotus engine management unit was added.

In February 2002, air conditioning was offered as an optional extra and, a month later, the Cobra immobiliser system was now standard equipment.

Also in March 2002, a new hard top was introduced.

It was offered with either Sports Touring or Race Tech specification, and both featured drilled disc brakes, different wheels, and metallic a paint.

This variant was not fitted with the long roof, and was discontinued in 2005.

The Series 2 Lotus Elise 111R, designed with an eye for the track, was powered by the Toyota 1.8 litre, 2ZZ engine.

In January 2002, and in the UK only, the standard Elise Series 2 received the Sport 135 engine upgrade, which included an aluminium inlet system, stainless steel sports silencer, and a reprogrammed engine mangement system to improve power output. It was now referred to as the Series 2 Lotus Elise Sport 135.

In March 2002, this upgrade was offered to all Series 2 Elise owners, and included an alternative gas flowed cylinder head, but not a sports exhaust.

The Lotus Elise 135R sports car variant was a track orientated model with sports suspension and wider wheels, and fitted with the same 135 bhp engine.

In some markets, the Elise 135R was substituted for the Sport 111, which was similar, apart from the fact that the 135 bhp Rover K-Series engine was replaced by a VVC unit, developing 156 bhp.

With an emphasis on track use, the Lotus Elise Sport 111 sports car variant was launched in May 2003, targeting Australia and nearby countries, and was based on the Series 1 Elise 111, but with the following changes:

It was powered by the 1.8 litre, Rover K-Series, VVC engine, which developed 156 bhp.