The Lotus Mark 1 to 6 Sports Car 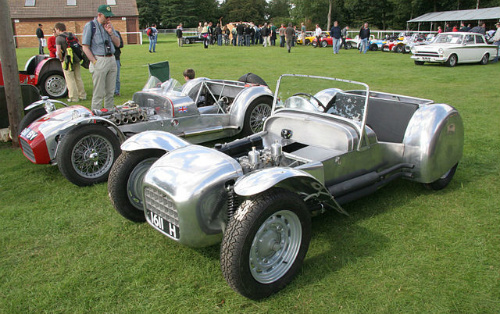 Designated the Lotus Mark 1 sports car, which he called the Austin 7 Special, in 1948, Colin Chapman designed and built his first sports car

The body consisted of aluminium panels bonded to plywood, which gave it additional strength.

He modified the rear suspension to improve handling, and the engine to develop more power.

Later on, larger wheels were added, and the front axle was split and hinged in the centre so as to convert it into a form of independent suspension.

That same year, the Mark 1 was entered into two trials, and achieved its very first Class win in each. 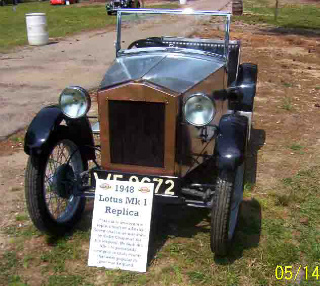 The chassis was strengthened, the Austin 7 back axle was retained, and the Austin engine and gearbox were replaced by those from a Ford 10 saloon.

He modified this engine as much as the trials rules would allow, and competed in trials events, funded by the 750 Motor Club, which promoted the sporting use of the 750 cc Austin 7.

He also entered the car in race meetings, such as Silverstone, in which he gained a Class win.

From then onwards, he centred his attention on racing circuits rather than trials events. 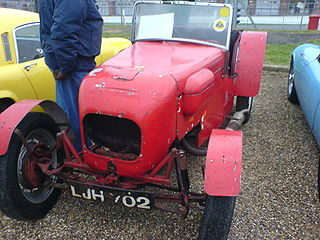 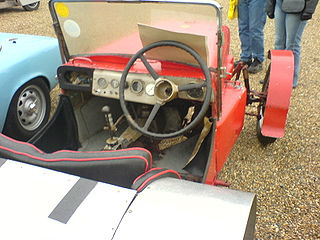 Retaining the Austin 7 gearbox and differential, he strengthened the chassis , added a streamlined two seater aluminium body, and modified the engine.

Within the year, the Mark 3 was the best performing 750 Formula road race car in the UK, and was the first Lotus sports car to be sold.

It did so well that the racing governing bodies had to change the rules so that other competitors had a chance against the Mark 3.

Built in 1952, this used a reinforced Austin 7 chassis, and an 1172 cc, 4-cylinder, Ford side valve engine, fitted to a three speed gearbox from a Ford 8 saloon.

It used a lightweight aluminium body, and the front axle was again split and hinged to produced an equivalent form of independent suspension.

Based on his success with this car, Colin Chapman set up the Lotus Engineering Company that year.

This was his single seater concept in which a car based on a non supercharged Austin 7 engine could reach 100 mph.

In late 1952, he realised there was latent demand for the sale of parts to individual customers, who would then build their own cars.

As a result, progress on the Mark 5 was halted for this new market potential to be investigated.

That same year, the first production Lotus, the Mark 6, was introduced.

It was available as a kit car, with a choice of engines and gearboxes.

It incorporated an aluminium body on an advanced spaceframe chassis, which would accept a number of different engines, with mechanical parts available from the Ford Prefect saloon.

Its superior performance and excellent handling characteristics made it a popular road race car.

Typical performance from the Ford Prefect engine was:

As it turned out, this model was a resounding success, and formed the basis for the introduction of the Mark 7, the illustrious Lotus 7 sports car. 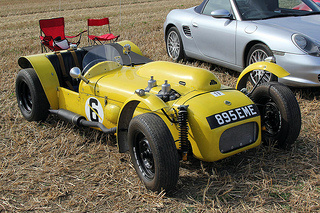