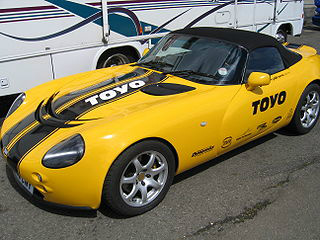 Launched in 2002, the TVR Tamora sports car, a two seater convertible, was introduced to cover the space left by the Griffith and Chimaera that were now discontinued.

It was marketed as an entry level model to the TVR range with a price tag of £43,460, and was powered by the company's own 3.6 litre, double overhead cam, straight 6-cylinder Speed Six engine.

The all alloy engine used four valves per cylinder, and had a fully tuned engine management system. It had a 58/42 weight distibution.

It was fitted with a tubular steel chassis, and some of its features included:

There was a simple folding mohair hood, with a Targa style one piece removable roof panel, which could be easily stored in the boot and which, when removed, allowed the rest of the hood to be folded down flat.

The Tamora presented an interesting scenario in that it offered Supercar performance for the cost of a Mazda MX-5. 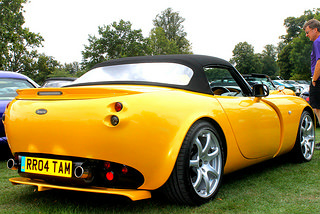 It offered sufficient space in the boot for some luggage, as well as leather seats.

Typical of its predecessors, the engine tended to make the cab noticeably hot when driven, but this was countered by the presence of air conditioning.

The ride height was rather low which meant that the front spoiler was prone to contact the surface of bumpy roads.

The Tamora sports car was seen as a direct rival to the Porsche Boxter S, BMW M-Series, and Mercedes SLK 32 AMG.

Inside the car, there was plenty of space, and the desired driving position was found by moving the adjustable steering wheel, whilst the pedal position could be altered by adjustment with a spanner.

Unlike some of its predecessors which used a button to start the engine, the Tamora was a key start.

Unfortunately, the much needed air conditioning was an optional extra, as was leather trim.

At its launch, some TVR die-hards regarded the Tamora as being ugly and, as things turned out, by the time it was discontinued in 2006, it was not the most popular model in terms of sales.

Many dealers felt that, for an entry level model, it was overpriced, and hence discouraged newcomers.