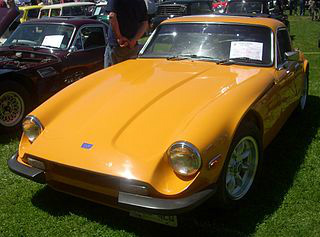 The 3000M Turbo sports car was premiered at the 1975 British International Motor Show at Earl's Court in London.

In order to improve the performance of the 3000M, TVR approached the company Broadspeed to produce a turbocharged version of the Ford Essex V6 engine.

Interestingly, the highly modified engine fitted into the engine bay of the 3000M with little trouble.

These cars were fitted with Koni shock absorbers, wider wheels, and a reduced compression ratio.

Of these, three of the Taimar, and one 3000S Turbos were converted into Special Equipment (SE) variants.

With a compresion ratio of 8.0:1, a turbocharger blowing at 9 psi, and fitted with a single Webber twin choke carburettor, the turbocharged engine developed 230 bhp at 5500 rpm, and 273 ft/lbs of torque at 3500 rpm.

The turbocharger kicked in at 2700 rpm which meant that, below this, the car performed in the same way as a normal 3000M.

In fact, the performance of the TVR 3000M Turbo actually gave the Porsche 911 three litre Turbo of the period a real run for its money.

M-Series cars ended production in late 1979, with the 3000M Turbo sports car returning TVR to the status of a builder of Supercars.

This involved the use of different engine mountings, an alternative radiator, and stiffer springs.

A Borg Warner four speed gearbox was used, and the rear differential was sourced from the Chevrolet Corvette.

Designated the TVR 5000M sports car, it was debuted at the 1975 Toronto International Motor Show.

However, that same year, a severe fire damaged the TVR factory in the UK, with the result that production was halted.

Notwithstanding, as a gesture of support in the company, John Wadham paid in advance for the order of six cars to be shipped to him for further assembly into the 5000M.

As it turned out, his action may have contributed in securing the company's future.

Subsequently, TVR shipped five M-Series fixed head coupes, that excluded engines or gearboxes, to the US importer for conversion into the 5000M.

In 1978, TVR built a limited edition of just one unit, less engine and gearbox, that was painted in white, and featured a brown stripe.

This had 5000M identifiable markings, and was dispatched to John Wadham for the addition of the V8 engine.

However, beyond 1980, six TVR Taimars have had their existing engines replaced by the V8 unit. 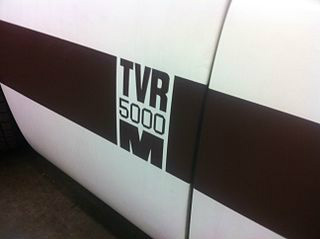