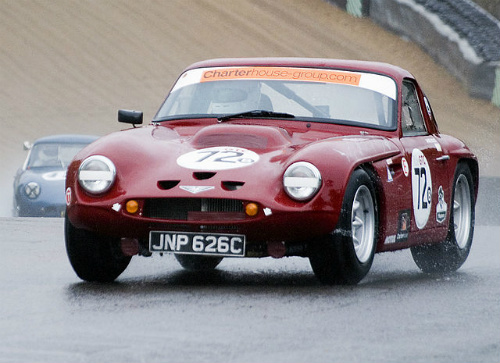 The TVR Griffith 200 sports car. In 1963, the idea of replacing the TVR Grntura's 1.8 litre engine with a Ford V8 unit centered on Jack Griffiths, who ran a car repair workshop in New York, for discriminating clients.

He was a Ford dealer, and was involved with Sports Car Club of America (SCCA) racing.

His plan was to install the Ford 289 engine and four speed gearbox into the TVR Grantura, and then sell the finished car through a network of dealers.

After some discussion, TVR agreed to supply him with a modified Grantura Mark 3 multi tubular chassis, with independent suspension, but without an engine or gearbox.

Following work with a sledgehammer, the chassis was refined sufficiently to accommodate the huge Ford V8 engine and associated drivetrain.

The name difference was due to the fact that the car was exported to the US in kit form, and assembled by Jack Griffith.

It was then marketed independently of the Granturas sold by Dick Monnich who, in 1961, had been appointed, by Jack Griffith, as his company's agent in the US.

The car was launched in the US at the 1964 Boston Motor Show.

It was to be powered by either a standard 4.74 litre (289 cubic inches), Ford V8 engine, developing 195 bhp, or the 4.74 litre special equipment version, with three carburettors, that developed 271 bhp.

Regarded as a serious rival to the AC Cobra, TVR was swamped with orders from the US, such that the majority of production was shifted in favour of the Griffith 200.

Until 1965, all Griffith production in the UK was exported to the US.

However, they were then launched into the UK market when shown at the Olympia Racing Car Show in London, in both the 195 bhp and 271 bhp versions.

Not surprisingly, it has been suggested that, with its massive power, short wheelbase, and light fibreglass body, the Griffith 200 was not the easiest car to handle.

A total of 192 units were built in the US before its successor, the Griffith 400, was introduced.

In fact, this line continued through to the Griffith 600, in the hands of another company, at which point production ceased. 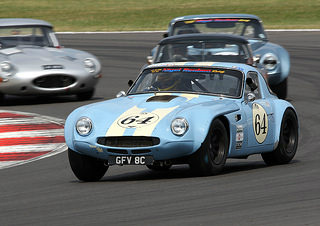 By reputation, the Griffith 200 sports car was a scary car to drive, and was known to suffer from:

The Griffith 200 chassis differed slightly from that used in the Grantura so that the Ford 289 engine and Top Loader four seed gearbox could be accommodated. This involved:

These refinements were performed by TVR prior to the chassis being shipped to the US.

Although the car was notorious for the engine overheating, such excessive cabin heat was regarded as a Griffith trademark.

Interestingly, the GRP bodies of the Griffith were originally fitted to the chassis by means of strips of fibreglass.

Unfortunately, the cars were renowned for being unreliable, and gained a reputation for poor build quality as well, which played a major part in Grantura Engineering's ultimate collapse.

In early 1965, the East coast of the US was in the grips of a prolonged dock strike, which meant that exports of Grantura bodies and chassis from the UK suffered.

Furthermore, this had a knock-on effect on the Griffith's assembly business.

As a result, in 1965, TVR was again in financial difficulties, which resulted in Trevor Wilkinson leaving the company he founded in disgust. Subsequently, the company collapsed.

What was left of the TVR business was acquired by the Lilley Family and, in April 1966, another 10 Griffith 400's were built, before production ended later that year.