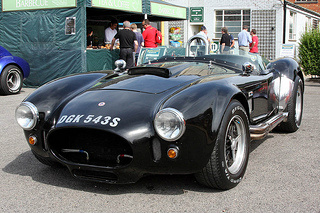 Designated the AC 289, it was marketed throughout Europe until production ended in 1969.

In 1982, the AC 289 continued to be built by Autokraft, an AC Cobra parts distributor, and was renamed the Autokraft Mark 4.

Following litigation by Carroll Shelby, production soon ended, but restarted in 1987 in a joint venture between AC and Ford whereby the Mark 4 was renamed the AC Mark 4, and powered by the same 302 ci Ford V8 engine.

In 1990, a lightweight version was introduced with output increased to 370 bhp at 5750 rpm by using an aluminium head, a single Holley 4-barrrel carburettor, and removing the catalytic converter.

Production of both variants ended in 1996 when a combined total of 480 units had been built.

In 1996, AC Cars was restructured with new management and, a year later, the company launched two cars with body styling similar to that of the Cobra.

The first was the Superblower, with an aluminium body, and powered by a supercharged 302 ci Ford V8 engine, developing 320 bhp.

The other was a more keenly priced car called the Carbon Road Series (CRS), with a carbon fibre body, and a detuned 302 ci Ford V8 engine developing 225 bhp. 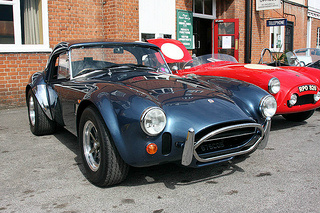 In 1965, the long overdue design of the chassis took place, and involved additional strengthening, and replacement of the leaf springs with all round coil spring independent suspension.

The chassis number of the first Mark 3 AC Cobra, with the 427 engine and new chassis, was CSX3000.

The new series of this iconic model was given the title "Continuation Cobra".

These "Continuation" sports cars were initially built in Las Vegas, and sanctioned by the Shelby organisation.

The concept was to recreate the original 1960's icon, but with latter day additions.

Understandably, it was the 427 S/C Shelby Continuation Cobra that was most in demand, and was to continue on where production of the final 427 S/C ended, which was around CSX3560.

In 1996, the first CSX4000 sports car used a chassis built by McCluskey Limited, together with the newly produced components, and rebuilt Ford V8 engines.

The majority of Continuation Cobras were built with fibreglass bodies, although some were ordered with bodies made from aluminium, and even carbon fibre.

In 1965, AC produced only 19 rolling chassis for the 427 Competition Cobra, and two of them, CSX3015 and CSX3303, were modified with the addition of two Paxton superchargers to develop 800 bhp.

The resultant 427 Supersnake was built to be a road going variant.

Only two such Supersnakes were ever built, and Carroll Shelby kept CSX3015, whilst he presented CSX3303 to his friend Bill Cosby.