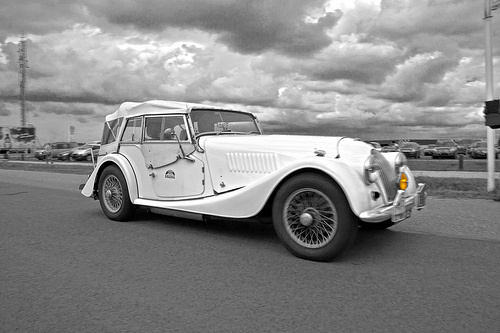 The less expensive Morgan 4/4 Series 2 sports car was discontinued in October 1960 after a production run of five years, in which 387 units were built, together with 38 units of the Series 2 Competition model.

That same month, the two seater 4/4 Series 3 was launched.

It used a similar chassis to that fitted to the Series 2 model, except that the track was made 2 inches wider.

The 1172 cc Ford side valve engine, used in the Series 2 model, was now replaced with the Ford 997 cc, 105E overhead valve unit, as used in the Ford Anglia saloon.

It had a compression ratio of 8.9:1, developed 39 bhp, 53 ft/lbs of torque and, once again, used a single Solex carburettor.

It has been suggested that the Series 3 represents the rarest model in the illustrious Series.

During its short 13 month production run to November 1961, only 58 units of the Series 3 were ever built

In November 1961, production of the Morgan 4/4 Series 3 was brought to an end, and it was immediately succeeded by the two seater 4/4 Series 4.

This model was powered by the Ford 109E 1340 cc, overhead valve engine, as used in the Ford Consul Classic saloon.

It had a compression ratio of 8.5:1, developed 74 ft/lbs of torque, and used a single Stromberg carburettor.

For the first time, 11 inch disc brakes at the front replaced drums all round on its predecessor.

Since Morgans are built with a wooden frame, this part tends to work loose, especially when the car is subjected to extensive exposure to the elements.

It is not uncommon, under these circumstances, for the wood to need replacing after a period of around seven years.