The Early Morgan Plus 4 Sports Car 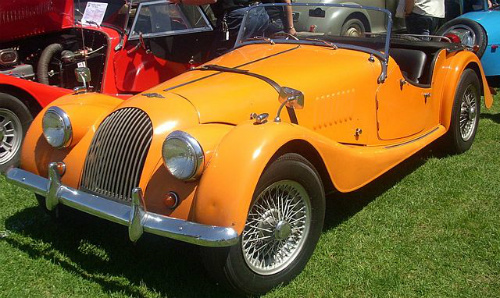 In October 1958, the last Plus 4, powered by the 2088 cc Standard Vanguard engine, was produced

The previous 16 inch diameter wheels were now reduced to 15 inch, and wire wheels became available as an optional extra.

In May 1959, front disc brakes were offered as an option, but became standard equipment in September 1960.

That same month, standard production Plus 4's, fitted with TR3 and TR4 engines, were modified by Lawrencetune to meet the specifications of the Plus 4 Supersports model.

A total of 40 Plus 4's, with TR3 engines, were converted into Supersports, together with 63 fitted with either TR4 or TR4A engines.

Morgan Plus Four Supersports production continued until 1968, to coincide with the phasing out of the Plus 4.

In October 1965, the Plus 4 Competition model made its appearance.

It was fitted with a standard TR4 engine, with a modified exhaust system, and specialised rear shock absorbers.

Only 42 units of this two seater model were built, and production ended in November 1966.

By 1966, the 4-cylinder Triumph TR engine had reached a point at which a further increase in output seemed unlikely.

Consequently, Morgan began the process of looking for a suitable replacement.

In 1968, Triumph introduced the 2.5 litre, straight 6-cylinder, TR5 engine as a replacement for the TR4A.

Unfortunately, Morgan realised that this unit would not fit into the Plus 4's engine bay.

The body styling of the early Plus 4's featured a high bonnet, called a high line, whilst the mid 1960's models displayed low line styling, which was preferred by the market, and became the adopted format.

As a result, this made the position of the TR5 engine all the more untenable.

In January 1969, the last Plus 4 built, and powered by a Triumph TR4A engine, was a drop head coupe variant.

By this time, 4,584 Plus 4's had been built, fitted with either a Standard or Triumph TR engine, and which included 656 units of the earlier model containing the distinctive flat radiator.

In the end, the search concluded with Rover offering their aluminium 3.5 litre, V8 engine, which formed the basis for the replacement of the Plus 4.

This was, of course, the Morgan Plus 8 sports car.

Finally, in October 1968, the two seater Plus 8 was launched, which marked the end of the road for the range of Morgan Plus 4 convertibles.