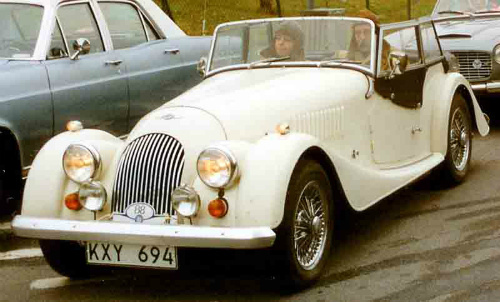 The Morgan 4/4 1600 sports car. In March 1968, production of the 4/4 Series 5 ended after a five year run, in which a combined total of 640 units of the Standard and Competition models had been built.

That same month, they were replaced, in the form of two and four seater convertibles, by the 4/4 1600.

This was powered by the 1599 cc, 4-cylinder Ford Kent engine, as used in the Ford Cortina saloon, together with a Ford four speed gearbox.

Since there was little difference in price between the two variants, customers tended to choose the Competition model over the Standard.

As a result, in 1969, the Standard version was withdrawn, with the Competition model being continued, but without the designation "Competition".

Between March 1968 and March 1982, when the Competition model was discontinued, a combined total of 3,513 units of both variants were built.

Between November 1981 and November 1985, the original Ford 1599 cc engine was replaced by a Fiat 1584 cc twin cam unit, which developed 98 bhp, combined with a Fiat five speed gearbox.

During this period, a total of 96 units of this model were built.

This engine developed 96 bhp at 6000 rpm, had a five bearing crankshaft, was fitted with a single Webber twin choke carburettor, and had a compression ratio of 9:1, and was linked to a Ford four speed Cortina gearbox.

In 1984, this four speed unit was replaced by a five speed gearbox, as used in the Ford Sierrra saloon.

In 1986, the original cam and peg steering system was replace by a recirculating ball unit.

Finally, between November 1991 and February 1993, the Ford 1597 cc, CVH engine was fitted with electronic fuel ignition, which increased output to 100 bhp.

During this period, a total of 196 units of this variant were built.