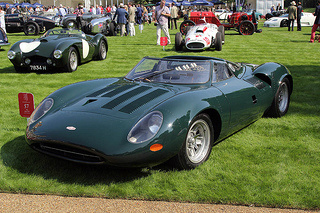 The XJ13 sports car. In 1960, the company considered the idea of a mid-engined Jaguar racer powered by a double overhead cam, V12 engine to challenge the supremacy of Ford and Ferrari.

However, the design of a mid-engined car was breaking new ground for the company.

The engine was based around a 5 litre, V12 unit in which two double overhead cam, 6-cylinder XK units were joined to a common crankshaft and an aluminium block. This was to be known as project XJ6.

The final engine required changes to the inlet ports, valves, and shape of the combustion chamber, and first ran in 1964.

It was originally fitted with six SU carburettors, which were subsequently replaced by Lucas mechanical fuel injection, and was linked to a five speed ZF gearbox which drove the rear wheels.

The car was to be built from the ground upwards with an eye to ultimate entry at Le Mans, and work began in 1965.

The engine was positioned directly behind the driver, and acted as the only form of support behind the rear bulkhead.

This meant that the suspension was positioned on the sides of this unit, and consisted of all round independent, with coil springs and dampers at the front.

The beautiful aluminium body design was down to Malcolm Sayer, who was also responsible for the styling of the C-Type, D-type, and E-Type.

However, within the year, the Le Mans race regulations were changed, which meant that the maximum engine capacity allowed had been reduced to 3 litres. 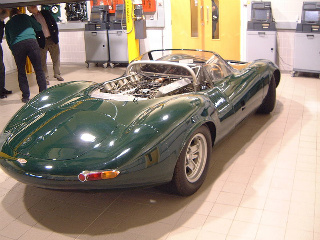 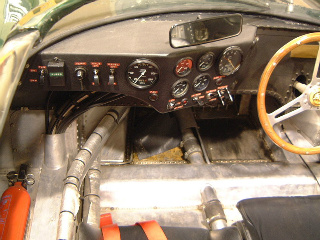 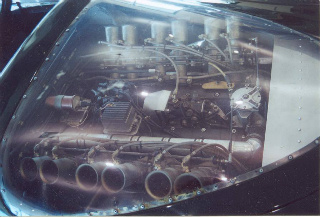 At a stroke, with its current engine, the XJ13 Jaguar sports car was no longer able to race at Le Mans and was, in effect, redundant.

By now, the engine fitted to the XJ13 was being used as a test bed for the development of Jaguar's upcoming V12 engine.

Since the car was not allowed to race at Le Mans, it was kept in store until 1971, when the Series 3 E-Type was launched, powered by the production V12, XK engine.

Essentially, therefore, the XJ13 sports car was the first car to be fitted with what would become the V12 unit that powered other production Jaguars from 1971 onwards.

Development of the Xj13 was never regarded as a priority by Jaguar cars, and by the time the first prototype was built in 1966, Ford had introduced their 7 litre GT40, which meant that the Jaguar was completely outclassed.

To make matters worse, when the prototype was tested at Silverstone, it was found that it required considerable development in order for it to become competitive.

Consequently, this single prototype would be the only example of the XJ13 sports car.

In 1971, the car was presented to the press and public, and driven to the MIRA test track to form the opening sequence of a film promoting the launch of the V12 E-Type.

Unfortunately, whilst travelling at over 140 mph, a rear tyre blew, and the car rolled over and was nearly destroyed.

However, instead of being scrapped, the car spent the next two years being completely rebuilt.

Jaguar rebuilt the engine, and new body panels were added to produce a rejuvenated XJ13, which was then kept in Jaguar's Heritage Collection.

Following an accident a few years later, the car was again completely rebuilt to produce a final version probably even better than when it first appeared as a prototype.

Of all the Jaguar cars, the XJ13 was quite unique, with only one ever being built. As a measure of its value as a collector's car, an offer of £7 million in 1996 was rejected by the owners, the Heritage Collection.

In the Jaguar cars range, the XJ13 must surely be regarded as one of the most beautiful. One can only imagine...what if it was developed further, and was allowed to take on Ford (GT40), Ferrari, and Porsche outside of Le Mans!


Top of the page