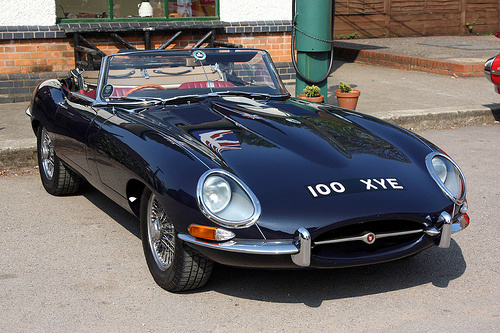 E-Type On The Track 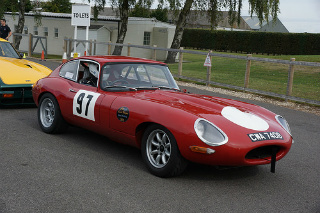 The E-Type sports car. Development work on the E-Type commenced in December 1956, in order to produce a road going Jaguar that would replace the XK150.

Consequently, the first prototype was completed in May 1957, and was designated the E-Type 1 Aluminium, or EA1.

It was based on the D-Type, and featured a monocoque construction with independent rear suspension.

This prototype gradually developed throughout 1958 when, in 1960, the company presented to the public the E2A Jaguar sports car which was expected to compete in the 1960 Le Mans.

Like the E1A, it was built with an aluminium body on a steel chassis, but it was powered by a 3 litre, XK engine with Lucas fuel injection.

Interestingly, E2A eventually passed into private hands when, in 2008, it was sold at auction for $4.96 million.

Following further development work on the E2A, the first production E-Type, designated the Series 1, was launched in March 1961, bound solely for export, with the UK launch four months later.

It was launched as a two seater convertible and fixed head coupe, and was powered by the 3.8 litre, 6-cylinder XK engine, fitted with three SU 2 inch HD8 carburettors, as used in the XK150S.

It used an iron block, an aluminium head, had double overhead camshafts, a seven bearing crankshaft, and a compression ratio of 9.0:1.

It was fitted with a four speed Moss gearbox, with no synchromesh on first gear, and there was no overdrive.

It had coil spring independent rear suspension, and power-assisted disc brakes (279 mm at the front and 254 mm at the rear).

A distinctive feature of the Series 1 car was the starter button on the dashboard, reminiscent of its forerunners. Jaguar cars performance: 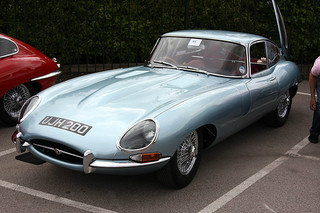 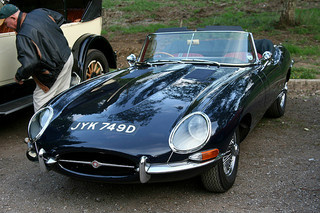 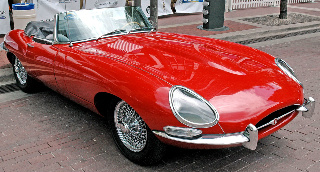 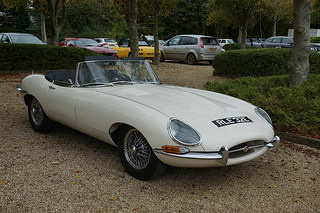 The Series 1 Jaguar sports car could be easily recognised by the glass covered headlights, small oval aperture at the front, indicator and tail lights above the bumpers, and the exhaust appearing below the rear number plate.

It had leather covered bucket seats and 15 inch wire wheels. The earliest models had flat floor pans, and were both rare and highly sought after.

In the later versions, the floors were dished, and this provided additional leg room and more comfort. Production would be unchanged until 1964.

Top speed remained the same, but the 0-60 mph time was reduced to 6.5 secs. This variant had uprated seats, brakes and electrical systems, and sported a "Jaguar 4.2 Litre E-Type" badge on the boot.

All cars were fitted with a Powr-Lok limited-slip differential. Chrome wire wheels and a detachable hardtop for the convertible were offered as optional extras.

In 1965, an improved Moss gearbox had synchromesh on all forward gears.

In 1966, in order to broaden the appeal, it was decided to build a version of the fixed head coupe in which the wheelbase was extended, in order to add two small rear seats.

With the body 9 inches longer, the roof 2 inches higher, and a steeper windscreen, this greatly improved the internal space.

Most sports car enthusiasts agreed that the Series 1 E-Type was the most desirable of these Jaguar cars, with the most popular being the 4.2 litre variant built between 1965 and 1967.

In terms of the second hand market for Jaguar cars, an example in good condition could command around $80,000, whist one in pristine condition could reach as much as $210,000.

This model must surely rank as a Jaguar cars classic.