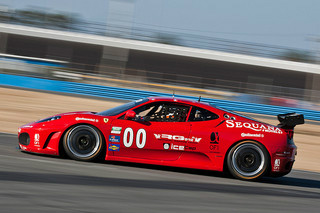 The Ferrari Challenge sports car was first introduced in 1993 as a single marque race Series designed specifically for amateur drivers.

Continuing the success of the Ferrari Challenge Series, the next sports car to carry the mantle was the F430 Challenge, based on the production Ferrari F430, and introduced in 2005 at the Frankfurt Motor Show. Only 100 were built.

This track orientated variant was fitted with the production 4.3 litre, V8 engine, but was subject to an exhaustive schedule of weight reduction, as in previous Challenge models, together with anti-roll bars and modification to the suspension, to ensure it was in full race trim.

A racing exhaust system was added, together with larger carbon ceramic disc brakes, with strong anti-fade characteristics, and BBS rims, whilst the engine management system received an upgrade.

It used the same F1-style paddle shift gearbox as in the production sports car, but there was no alternative manual gearbox.

The springs, shock absorbers, and anti-roll bars were all upgraded to race specification.

The F430 Challenge received modifications to fifth and sixth gear and final drive ratios in order to accommodate race conditions.

To reduce weight to the minimum within the cockpit, carpets, stereos, and all sound insulation were removed, whist the production leather seats were replaced by ultra lightweight carbon racing seats. The result was that net eight was reduced to 1225 kg.

An intriguing feature related to the steering wheel which was held in place by an easily removed boss, which allowed the wheel to be removed quickly in order to facilitate entry in and out of the cockpit.

Fitted to the wheel was a button to communicate with the pit, and one to interrogate the digital display unit containing comprehensive engine data.

The cockpit contained a full roll cage and racing harness, lightweight carbon door panels, and all the window glass was replaced with plexiglass.

The gearbox and engine control system were set to Race-mode, ABS was retained, the stability and traction control were disengaged, and the E-Differential facility on the production car was replaced by a mechanical version. These changes dispensed with the need for the Manettino switch.

A new grille was fitted to the rear of the car to maximise heat extraction from the engine.

It was shod with 19 inch rims, and Pirelli slicks which were specifically designed for the car. 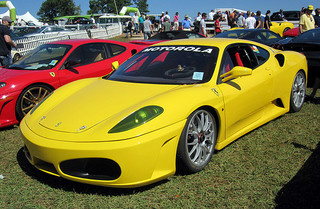 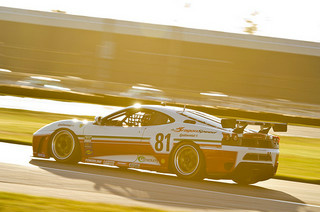 The engine used in the F430 Challenge was the production 4.3 litre, V8 unit, with double overhead camshafts and four valves per cylinder that generated 483 bhp at 8500 rpm (the redline), and 343 ft/lbs of torque at 5250 rpm. 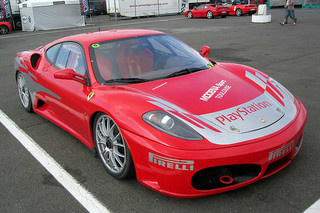 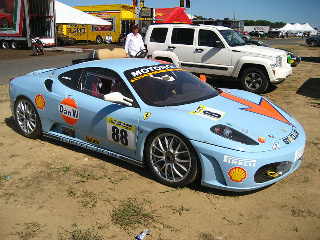 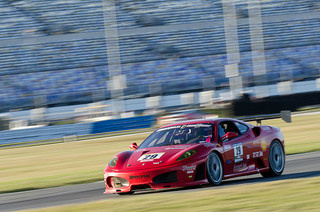 Examples of the Ferrari F430 Challenge were sold at auction for prices ranging between $95,000 and $160,000, dependent upon age and condition.