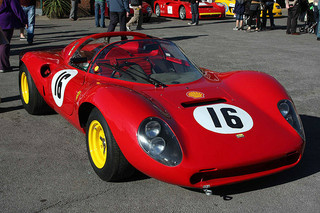 Aimed at the affordable sports car market, the Ferrari Dino was the right car at the right time to establish a new trend and, importantly, increase company sales.

Furthermore, Enzo Ferrari's son and heir, Dino, had leant his name to the car.

The original Dino was also known as the 206 GT, in which "20" referred to the litre capacity of the engine, and "6" indicated the number of cylinders.

It was the first Ferrari to be built in sizeable numbers.

However, in order to satisfy the homologation rules (certification to race), the company would have to produce 500 of the cars using the V6 engine.

Since this was not feasible, Fiat agreed to produce a sports car powered by the V6 unit, which they would name the Fiat Dino.

Under this arrangement, Ferrari was able to compete with their own sports car, the Ferrari Dino 206 GT.

Both sets of engines were produced by Fiat, who simply dispatched the first 150 units to Ferrari in early 1968.

The first prototype, designated the 206 SP (where "S" and "P" referred to Spyder convertible, and Prototype), was introduced at the 1965 Paris Motor Show, and incorporated a traditional tubular steel chassis with a 90 inch wheelbase, in which the engine was positioned transversely.

The final production version was launched in 1968. 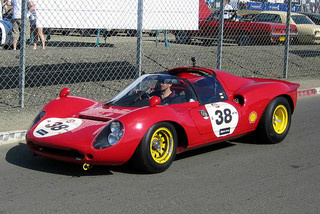 The Ferrari Dino 206 GT was a two seater, fixed head coupe, designed by Pininfarina, with an emphasis on rounded edges and smooth curving lines, which was characteristic of earlier Italian cars.

This body styling drew much praise and, even to this day, is regarded as a design classic.

It had coil spring independent suspension all round, with telescopic dampers, anti-roll bars front and rear, disc brakes on all four wheels, and knock-off alloy wheels.

An interesting feature was its lightweight body that was made of aluminium, which was unusual since nearly all Ferrari's built around that time used steel body panels.

This mid-engined sports was powered by an all aluminium 2 litre, chain driven, twin overhead cam, V6 unit, with a compression ratio of 9.7:1.

It was the first Ferrari to use both electronic ignition and rack and pinion steering.

Some of the competitors of the Ferrari 206 GT included: Series 3 Jaguae E-type, Lamborghini Urraco, and Maserati Bora. Ferrari performance:

In terms of the second hand market, a Ferrari 206 GT in excellent condition was sold at auction in the US for $170,000.