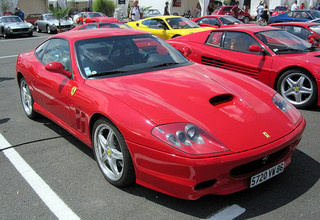 The 575M sports car. Ferrari phased out the 550 Maranello in 2001 and replaced it, a year later, by the 575M Maranello, a two door grand tourer, where the letter "M" referred to the fact that this model had been modified. The body styling by Pininfarina remained unchanged

With the gearbox and differential positioned between the rear wheels, this produced an ideal 50:50 distribution of weight between the front and rear of the car.

There were four wheel drilled and vented disc brakes, power assisted rack and pinion steering, and independent coil spring suspension all round, with gas-filled dampers and anti-roll bars.

Interestingly, the suspension was controlled by the gearbox in order to minimise pitch during a gear change.

It incorporated a system of independently controlled dampers positioned on the corners of the car.

By choosing either a Sport or Comfort-mode, the optimum ride height for the prevailing conditions would be selected automatically.

Production was maintained until 2006, when it was replaced by the Ferrari 599 GTB sports car in the middle of that year.

In 2005, Ferrari developed what they called the GTC pack, which offered enhanced handling characteristics.

The optional package included an up-rated suspension system to enhance performance, a form of free flow exhaust system, 19 inch wheels, and new 16 inch disc brakes at the front and 14 inch at the rear using Formula One composite materials.

Launched at the 2005 Los Angeles Motor Show, this was the convertible version of the 575M Maranello, and was available as a limited edition of 559 cars.

Using the same engine, output was increased to 533 bhp, and the car was offered with either the six speed manual or F1-style gearbox, as well as the optional GTC Handling pack.

However, the main feature was the flip-top roof, which could be rotated 180 degrees to lie flat on the boot when not required.

The roof consisted of electro-chromic glass, which could vary the amount of light entering the cabin by way of five levels of tint, so that it could rapidly change from dark to light. 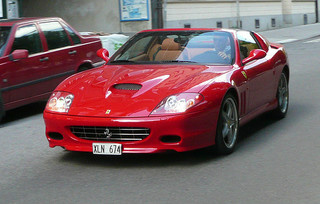 The 575M Maronella sports car was powered by a 5.75 litre (as reflected in the name) aluminium V12 engine, with twin overhead camshafts, and four valves per cylinder.

This produced a top speed of 202 mph, and a 0-60 mph time of 4.1 secs. Fuel consumption was 12 mpg in the city. It used dry sump lubrication, and Bosch fuel injection.

Apart from a manual six speed gearbox, there was also the option of a semi-automatic unit using an F1-style gear change.

This was the first time that a Ferrari V12 had adopted the new electro-hydraulic gear selector which was, in fact, an updated version of the paddle-shift gear change that was used in the Ferrari 355 F1 Berlinetta of 1997.

In 2003, Ferrari developed a racing version of the 575M Maranello, which was designated the 575-GTC sports car, with the letter "C" meaning competition, and designed for the FIA GT Championship.

However, compared with the 550-GTS built by Prodrive, it was completely outclassed and, consequently, was withdrawn at the end of the 2005 season.

This was another of the classic cars by Ferrari.