The Ferrari 360 Spider sports car of 1999-2005 was regarded by many as the finest convertible produced by the company up to that time.

In order to counter the loss of rigidity caused by removing the roof of the 360 coupe, Ferrari strengthened the sills, the front of the floorpan, the rear bulkheads, the sides of the car, and cross bracing in front of the engine, together with redesigning the frame of the windscreen.

With all these additions, the 360 Spider was only 60 kg heavier than the Modena variant, owing to the extensive use of aluminium in the body panels and chassis.

There was a glass cover over the engine so that it could be easily seen.

Owing to the position of the hood when folded down, large grills on the side of the car provided an additional supply of cooling air for the engine.

The soft top was electrically operated, and took approximately 20 seconds to complete the two-stage process of folding down between the cabin and the engine bay, where it was covered by its own tonneau cover.

For added protection, a tubular steel anti-rollover bar was positioned behind each of the two seats.

Beneath the bar's leather covering was a special material designed to lessen the effect of impact with an occupant's head.

Anti-roll bars were added, and it had 13 inch vented disc brakes all round, and linked to an ABS system.

Resulting from the design of the chassis, the interior of the 360 Spider was more spacious than that of its 355 counterpart, and it shared the same interior specifications as the Modena.

The aerodynamic design of the cab was such that, with the top down and driving hard, the pages of a newspaper on the passenger's lap were not even ruffled, coupled with the fact that the cabin was almost draft-free.

It was fitted with either a six speed manual or F1-style paddle shift gearbox.

However, the additional weight of the Spider affected its performance with the result that the top speed was reduced from 189 mph in the Modena to 180 mph, together with a slightly higher 0-60 mph time of 4.4 secs compared with 4.2 secs in the Modena. 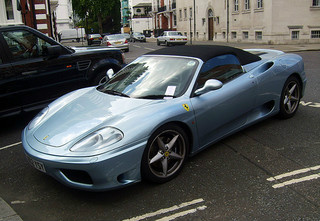 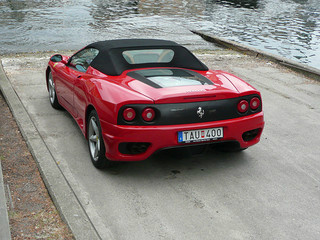 On the second hand market, a Ferrari 360 Spider, in good condition, would sell for around $55,000, whilst an immaculate example would command around $100,000.

One of the classic cars from Ferrari.