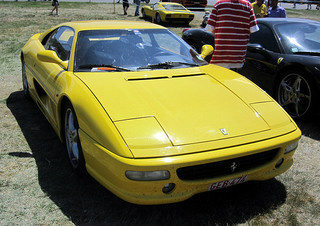 Styled by Pininfarina, there was an emphasis on smooth lines, whilst embodying a fastback style.

It was offered as the two seater Berlinetta coupe, the GTS with a Targa-style top, and the Spyder convertible.

It used a steel monocoque chassis and tubular engine sub-frame, coil spring independent suspension all round with gas-filled shock absorbers that were activated electronically, and anti-roll bars.

The driver was able to control the firmness of the ride by choosing the appropriate damper setting of Comfort or Sport.

In terms of aerodynamics, this sports car was fitted with a complete body under tray that prevented lift when driven hard.

Interestingly, the leather covered seats were positioned such that the driver was close to the car's central position. It had:

From launch up to 1997, they were fitted with a manual six speed gearbox which was the only one at that time.

In 1997, all three sports cars were then designated the Ferrari 355, with the letter "F" having been dropped.

Also that year, and for the first time, they were fitted with a Formula One-style paddle gear shift, positioned behind the steering wheel, and linked to the six speed manual gearbox, and with no clutch pedal.

This addition increased the selling price by $6,000, and allowed gear changes to be performed in a matter of milliseconds, and left the driver's attention centred on the road, and not distracted by manual gear changes.

With the introduction of the 355 sports car Series, there was a change in the nomenclature, with the first two letters referring to the engine's capacity, and the third figure indicating the number of valves.

This change was meant to emphasise the introduction of the five valves per cylinder in the 355.

By the time production ended in 1999, a combined total of 11,273 units of all the variants had been built.

Each of the three 355 sports cars were powered by a mid-engined, rear wheel drive, 3.5 litre, double overhead cam, V8 unit whose capacity had been increased from 3.4 litres, in the 348 Series, by increasing the bore by 2 mm.

However, the main feature of the engine was the addition of a cylinder head that contained five valves, which improved intake efficiency and increased performance.

Furthermore, the compression ratio was raised to 11:1, and some of the engine's internals were constructed of lightweight materials, such as the use of titanium alloy for the con rods, and aluminium alloy pistons.

The two Bosch Motronic engine control units, that managed both fuel injection and the ignition system, were upgraded from the M2.7 series in 1995 to the M5.2 version from 1996 onwards. 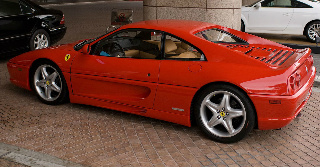 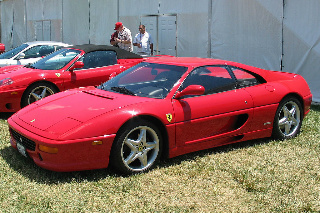 The 355 Spyder convertible was introduced in 1995 and featured, for the first time on a Ferrari, a soft top that was electronically activated automatically.

This featured a Targa-style hard top roof that could be stored behind the seats, or in the front boot, when not in use.

This was the last time that Ferrari produced a Targa-styled GTS variant. 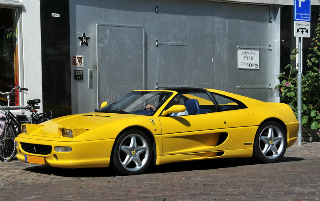 On the second hand market, a typical price range for the Ferrari 355 Series was: