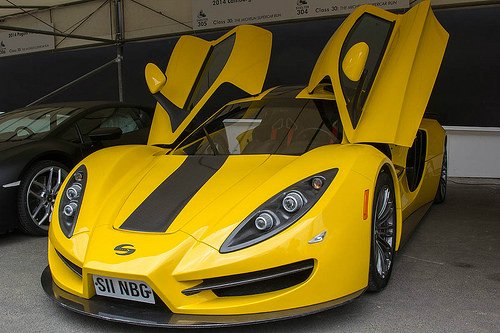 In 2013, Sin Cars launched their road-racing R1 sports car, which was to be built in the UK.

Powering the track variant was a mid-engined, 6.2 litre, V8 unit, sourced from the Chevrolet Corvette, that developed 525 bhp and 500 ft/lbs of torque.

Fitted with a Graziano six speed manual gearbox powering the rear wheels, it produced a top speed of 200 mph, with 0-60 mph in 2.5 secs.

With a carbon composite body on a tubular space frame chassis, it had a curb weight of 1100 kg.

It used 360 mm AP Racing discs all round, 19 inch wheels, adjustable suspension, a rear wing whose position could be fine-tuned, and a 40:60 weight distribution.

It had a full roll cage, and the simple interior included a racing steering wheel and seats.